Have you ever had candy goo? I've had a couple different varities a few times and I have to say I'm never overly impressed. Sure I like novelty as much as the next guy. And sure I can get behind a bag of candy blood at Halloween, but for everyday candy? I just don't think its a great way to eat your candy.

My local Walgreens has three different kinds of goo. 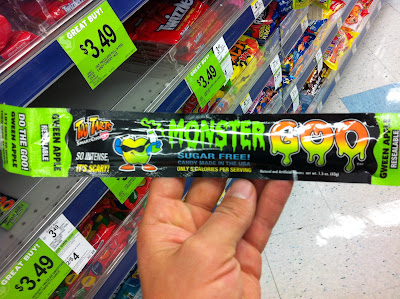 Ok, so I love the Monster Goo packaging! Does the goo glow in the dark?! I don't even care I want it. I don't care that its SUgar Free and only 5 calories... Its TOO TART! and So intense its SCARY! now thats serious stuff. And just look at their mascot. That dude is awesome. I want to party with some Monster Goo now. 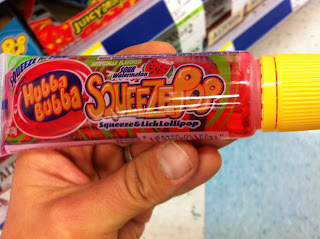 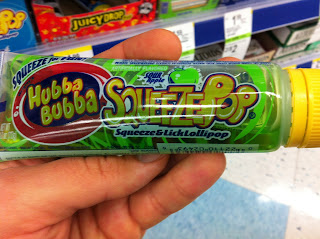 And then here you've got the other way to go. Its wacky, its colorful, but its also something mom might really get you as opposed to Monster Goo. I've had the Hubba Bubba SqueezePop before and I have to say it could be worse. It has the consistency of hair gel, but some pretty strong flavors, and you can't eat too much at a time... well you probably could but its so strong you probably wont want to, so at least in my experience, it lasts well.

Hopefully we'll get some new goo in before Halloween. Let me know what kind of goo you've tried or seen lately. And have a gooey rest of the week!
Posted by Geoff at 6:00 AM