Today we've got another fun one for you, Trolli Sour Brite Crawlers. 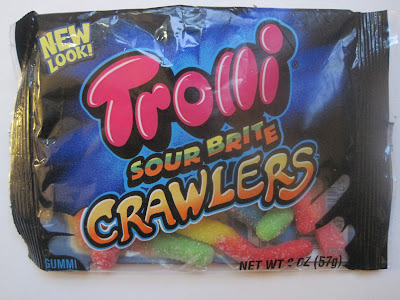 We'll make this short and sweet, because the candy is pretty self explanitory. I'm not overly familiar with Trolli, I think they're German, but I see them in the bag candy section all over the place. These are like the upstart competitors to Haribo. I give them props for that alone. And specifically here while I'm not a huge sour fan I've said it before and I'll say it again (damn the consequences!) gummy worms are better than gummy bears. There. I've said it. Now what???

Ok seriously, looking at this packaging I'm intrigued. I like the viewing window, and calling them Crawlers rather than worms is great. Its kind of creepy. Is this an early Halloween candy? on the shelf? I don't think so, but it would fit in well with that candy. 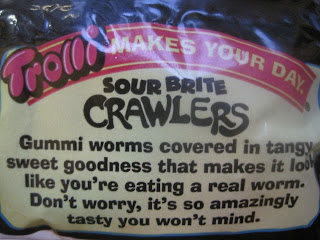 On the back of the packaging is a little blurb: "Trolli Makes Your Day Sour Brite Crawlers. Gummi worms covered in sweet goodness that makes it look like you're eating a real worm. Don't worry, its so amazingly tasty you won't mind." Well I'm not sure I can take them at their word for that. I kind of think any sane person would know these are not real worms at first glacne. I mean these are day glow! Still overall good packaging. 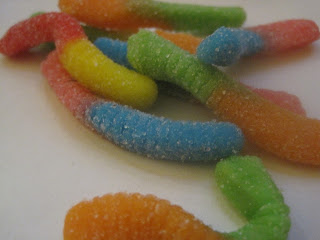 Let's look at these worms, I mean crawlers properly. They're the kind of gummy worm that has the powdered sugar on the outside mixed with Sour crystals. Sweet and Sour together. Nice. I'm liking the design work too. 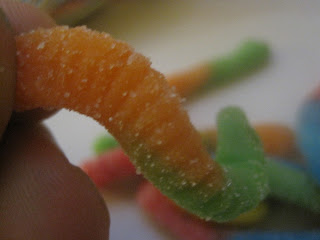 Look at those wrinkles, that;d pretty awesome. Its the little tings like this that really make a candy stand out for a kid. Totally cool 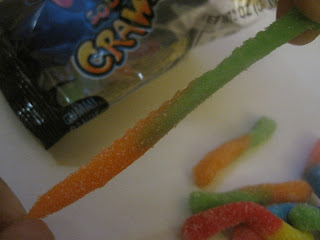 Ad look at that stretch. These are the factors that make for a great gummy worm. As long as it tastes ok, and doesn't get too stuck in my teeth I'm sold! 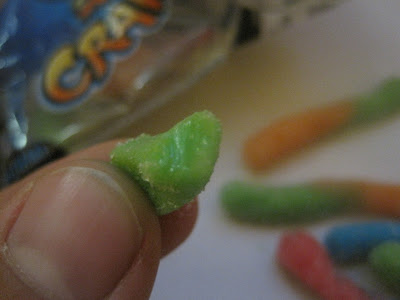 Ok, so biting into it the first impression is not sour. Definitely not sour. These gummi Crawlers only taste sour in the vaguest of more vague ways. These are sugary, gummy, and more about texture. These things are tangy with a great chew, not sticky,  just chewy. They're definitely worth picking up if you like kind of fruity, tangy tastes. These aren't sour though, in fact they're pretty mislabeled, but for a guy like me who's only borderline into sour these are perfect .

For more on Trolli and to hceck out their awesome mascot Troll dude visit http://www.trolli.com/
Posted by Geoff at 11:06 PM