There are a lot of great breakfast cereal mascots but surprisingly few candy related ones. Although considering the makeup of some of those breakfast cereals they could probably be considered candy. Regardless of that, in straight candy there are a few, just not as many as I think there should be,

Sure we all know the M&M crew, and the Nerds, but there are a few other players in the mascot arena that I thought we'd look at today. These guys are not the superstar mascots you may know, lets have a look at some of these minor mascots. 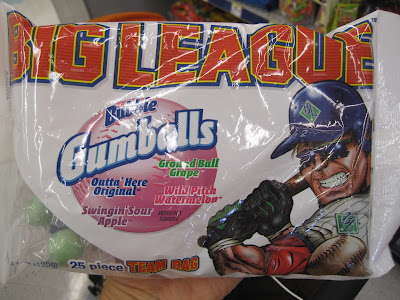 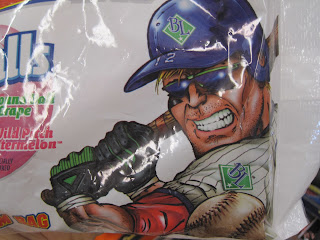 Ok, so I suppose technically yes I have heard of Big League. But not Gumballs, Big League was always about shredded bubble gun. Amazing that it was ever sold, the gum was (and is) made to look like chewing tobacco, whihc baseball players loved back in the 70s. I've never seen Big League as a gumball before though. I think the brand has slowly faded since people probably don't even get the reference to chewing tabacco anymore. Maybe this gumball form factor is supposed to get them back in the game...

But check out that mascot. I don't know his name but he looks like what I imagine Dolph Lungren to look like when playing baseball. Speaking of which... why didn't anyone ever do that before? Dolph Lungren in a baseball movie would kill. This guy is all muscle and teeth. God look at those, they're just huge chompers. He probably east bubble gum exclusively, so has built up extra superhuman mouth muscles. And look at the shades. This guy is cool and he knows it. I mean he doesn't even take off his shades to hit the ball. Hey wait a second... is he about to hit the gumball? I just noticed that.Anyhow I love this guy. He's awesome and I want to buy whatever he's selling.


Double Bubble is even more of a classic than Big League Chew, but probably less exciting. Honestly I always thought of them as the poor mans Bazooka Joe. But its a Tootsie product that apparently comes in a variety of flavors. Here though it only comes up as original. At least the bag has 10% more to it. And for FREE no less! 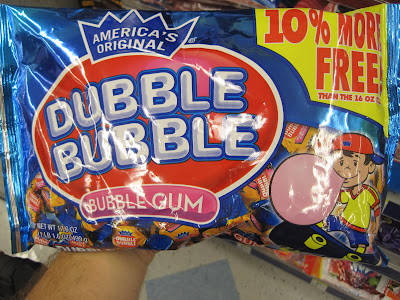 So who is this cool dude on a skateboard, recklessly blowing a humungous bubble? That is Pud. At least I think its Pud. Yup... kind of a dopey name for kind of a dopey kid. I mean he's happy and all, but who could seriously blow bubbles especially huge ones like that while skateboarding. Seriously that is a health hazard. He could easily crash into something! 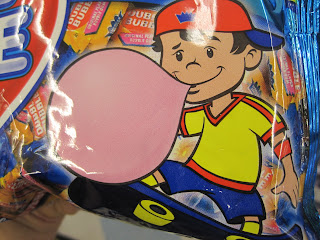 The one thing I'll give it is that at least this conveys something. At least I know that I'm getting some good gum for bubbles. Oh wait, I suppose "Double Bubble was a tip off there too.If you want to see a few of the Pud comics that they produced back in the day, that came with the gum, here's a link. Not super exciting stuff if you ask me though.I just think Pud is a dud.

I'll have some more Minor Mascots for you another day. Lets leave this for now. Question, would you rather buy gum from Dolph the ballplayer, or "cool kid" Pud the Dud. ? hocked by twins, and sugar crazed kids?

Personally I'd stick with Dolph, that guy is all around awesome.
Posted by Geoff at 6:00 AM