"Crunchy peanut butter in a rich chocolate coating" sounds like luxury wrapped in a cloud... that can only mean its time to review 5th Avenue! 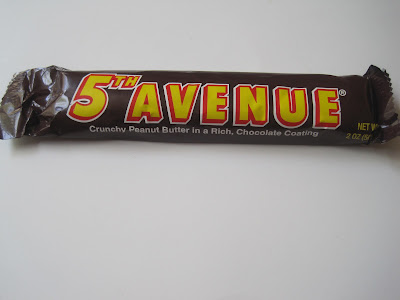 The space along 5th Avenue is known by many to be the height of decadent urban New York living. From the upper west side, and past central park the street was known at one time as the most expensive area in the world for shopping. While I'm not sure if that's true to this day, having personally walked along 5th Avenue in NYC, and seen countless films and movies staged there I will say evoking that kind of luxury with your chocolate bar is a good idea. At the very least it gives the buyer a sense of what they 'should' be in for. Words like luxury, decadence, and and indulgence come immediately to mind; so lets hope Hershey's 5th Avenue chocolate bar can live up to its namesake.

looking at the wrapper doesn't give us too much. Simple brown, with bold yellow lettering. It's direct, I'll give it that, but if you want people to think chic new york living, this isn't really it. Maybe this is more of a brownstone from the other part of 5th Avenue down in Harlem...

Opening up the candy, I find mine to be a bit melty. That said the room I'm reviewing in is a bit warm so I won't hold that against it. There's no really significant chocolate odor, and nothing special about the bar itself on the outside so lets dig in. 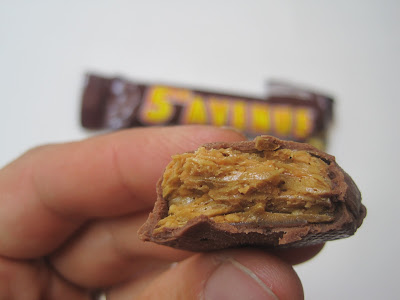 Crunching into the bar is much akin to a Butterfinger,or maybe a Crispy Crunch experience. You can see the lines where layer after layer of peanut butter were laid onto this chocolate bar. it's like a building with floor after floor of peanut butter cemented on-top of each other. And cemented is the right word here because this peanut butter isn't smooth like a Reese bar, its hard, kind of like a Butterfinger, only not quite as flakey, and definitely not quite as smooth.

Frankly this seems like Hershey's answer to Nestlé's Butterfinger. It has something of the same texture and that same odd chew to it, but it does not have the smooth, rich, buttery quality that Butterfinger delivers. That said it holds together better than a Butterfinger ever did... But I didn't come here for a clean experience, I want flavor dammit, and 5th Avenue (while decent) fails to deliver on any kind of luxury implied in the name.

It may not be bad, but it's certainly nothing special. I'd recommend this to fans of Butterfinger. Give it a shot, but don't expect to be blown away.

5th Avenue is a product of The Hershey Company. Find more from them at http://www.thehersheycompany.com/