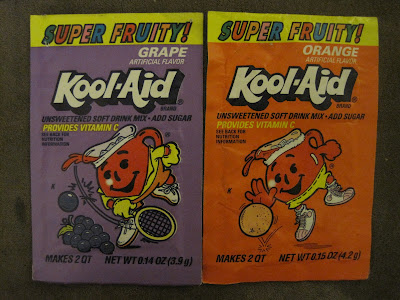 For many years I've been a pop culture fanboy. And one of the things I've always really responded to is advertizing, especially 'pop' advertizing. The kind of advertizing that hits on that sweet spot of playful, fun, and cool geekery. Along with that came an appreciation for good design work. If you've watched my video reviews of candy then you know that I ALWAYS talk about the wrappers. That's because candy wrappers are important. They should convey what the potential buyer is about to get into, and if not maintaining a theme in the design, candy should always at least have a sense of what tone it wants us to take from it. If your wrapper isn't fun, then I don't expect the candy or the experience to be fun.


And that is one of the reasons I love Kool-Aid. The product hits squarely into that sweet spot of pop advertizing, especially considering the nostalgia I associate with the late 80s - early 90s Kool-Aid Man commercials. They we're honestly a great example of creating a tone and feel for a product. It clearly resonated with kids too, Kool-Aid was massively popular back in the 80s.


Its unfortunate to see how far the product has fallen.... but I'd rather not dwell on that. 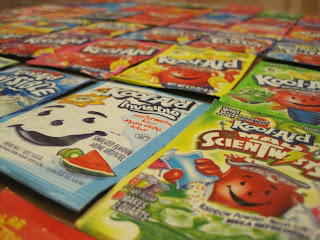 A few years ago I was reading one of my favorite blogs at the time X-Entertainment, and I came across his review for... I think it must have been Purplesaurus Rex, and I was hooked. Matt at X-E spent a time over a year or so reviewing a ton of Kool-Aid flavors. it was really a treat, and one of the first time I got a bit obsessive with a blog. In fact that is one of the reasons I started this very blog here.

Kool-Aid is awesome. It has real power with kids, and I still love it to this day. One of the many things I love about Kool-Aid is the graphic design work. The packages and variations are very cool. I like the colors, and the evolving elements over time, but I especially love the Kool-Aid man himself. He graces most of the Kool-Aid packages and is possibly the best food mascot design ever.

So with that, lets have a look at my collection of Kool-Aid packets. 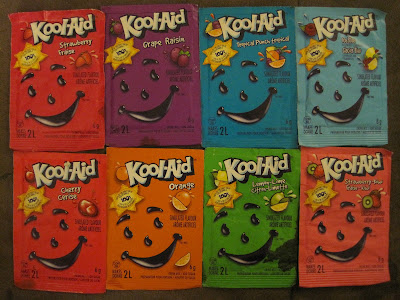 While these ones look old they are actally only from around 2009. I picked them up in Canada (hence the french). This shows off the current roster of flavors up in the great white north: Strawberry, Grape, Tropical Punch, Ice Blue, Cherry, Orange, Lemon-Lime, and Strawberry-Kiwi. At least this was the current roster the last time I was up there and checked. At least here in the States the market after 2010 has seen a steep decline in  kool-aid variety. I will say about these packages though that I love the fact that right off the bat you know this is kool-aid. That face is all you need. Pretty impressive considering how the rest of their mascots body draws your attention. Oh Yeah! 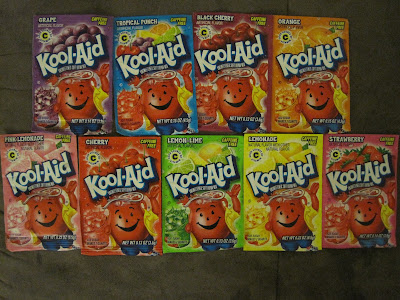 Until a little while ago this was the roster of standard flavors available in the US. Grape, Tropical Punch, Black Cherry, Orange, Pink Lemonade, Cherry, Lemon- Lime, Lemonade, and Strawberry. These were, and are the standard packet designs you'll see around stores here. That said since around 2010 most stores seem to have switched and ONLY offer Tropical Punch, Lemonade, and Cherry. Sometimes if you're going for a larger size, say the tub of kool-aid, powder you'll find Grape or Ornage but mostly its just those very depressing three flavors. And I'm not saying Tropical Punch, Cherry, or Lemonade are bad, in fact they're all good. But my real favorites were always Black Cherry or STrawberry. Neither of which are readily available anymore :(

I definitely like elements of the design work on these packages though. Kool-aid man is in his dapper yellow coat, holding out your drink of choice. You get to check out some of the fruit above the logo, and it generally conveys what it should. I like how excited the kool-aid man is; he's actually spilling some of hismself outin his haste to serve you a tasty beverage. My only gripe is that I would love to see the Kool-aid man's body actually be the color of the flavor. Oh I know that was only saved for very special occasions in a few ads but I was always impressed to see them shake things up a bit. 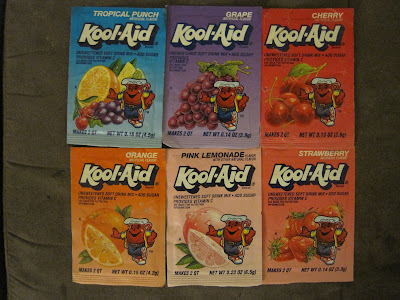 Moving on, these ones above are some of the older packets I've got. just kool-aid man chilling out beside some gigantic fruits. I don;t understand why they wouldn't have put all that text on the back of the packaging, but they didn't and while what we're left with is a classic, it also features a pretty small version of the kool-aid man.

Now lets give it up for the Island Twists.


Gotta love that ja-fakin accent! Well I don't recall ever having those originals but these are the older Island Twists I've got in my collection. 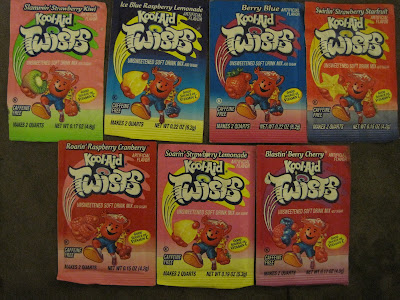 Seriously these are some of the best creations known to man. I am a big fan of the Island Twists in general and I was happy to see so many different flavors out there for a time. Almost all of them are great, and everyone is totally drinkable. My favorite of the bunch is probably Slammin' Strawberry Kiwi, but Soaring Strawberry Lemonade, and even the innocuous Berry Blue are great. 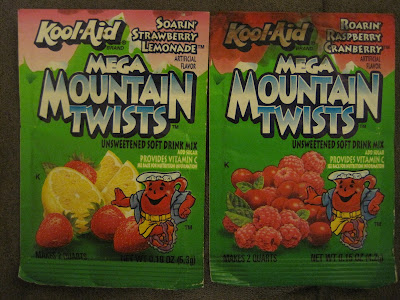 Interestingly Soaring STrawberry Lemonade and Roarin Rasberry Cranberry we're already Mountain Twists!??! I know they wen't from the Mountains to the Islands, but let me tell you, they are just that good! Actually I find this a bit confusing, but I suppose thats just how it goes in the crazy world of kool-aid. 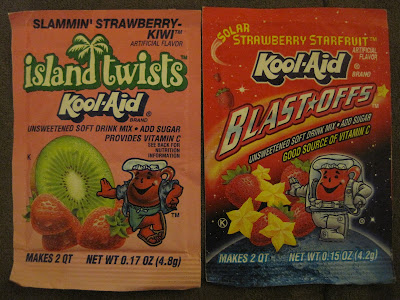 And talk about your different packaging. This "Solar" Strawberry Starfruit is actually my absolute favorite kool-aid flavor that I own. I mean just look at it! THE KOOL-AID MAN IS IN A FRIGGIN SPACESUIT!!! how awesome is that? its amazing! yeah... just chilling out in space. leaning away against this awesome strawberry and starfruit asteroid. and is he standing on the earth?! wtf is going on here! greatest packaging ever. I will blast-off thank you very much.

btw - how many Americans have every even had a starfruit? especially in 1990??? 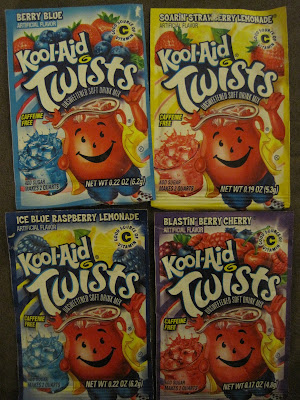 Ok, so here's a look at some more modern Island Twists.Very busy packaging. I'm not sure why but I always expect the Soarin' Strawberry Lemonade to highlight the Strawberry. With the package being yellow like that I keep thinking its all lemon. The rainbows are a nice touch on all of the packages though. And I especially like the blue raspberries. 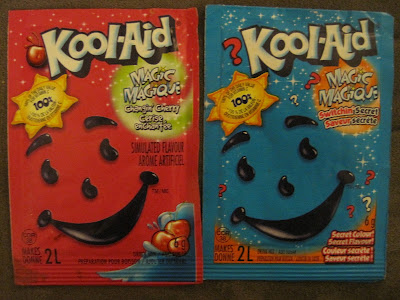 Did you know there's magic in the air...These two above are some more Kool-aid packets I picked up in Canada. The basic idea here is you get it and the powder is one color but it turns a different color once the water is added and its mixed. Then on top of that it might taste like a different flavor than its colored. David Blaine eat your heart out... 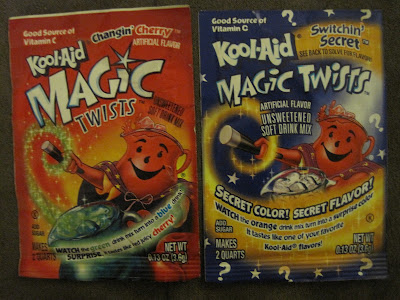 The Americans got in on the magic action as well with these two. Actually there were three in the line but I only ever found two. Both here and witht he Canadian ones you've also got a secret one. I Don't know about that though... what if your kid ends up hating the flavor?

For the life of me I can't remember what the actual flavor of this Switchin' Secret flavor is but I'm sure its awesome :)

Just wanted to take a break for another awesome ad. Sharkleberry, alongside Purplesarus Rex were possibly the coolest side characters you could ever have. Seeing them pal around with the Kool-Aid man was just awesome. Also one was a shark and the other a dinosaur. thats pretty awesome on its own. Still great company. ok back to the pics... 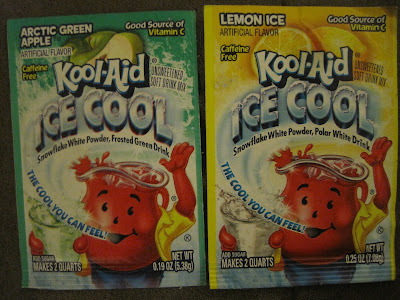 Kool-aid has taken more than a few twists and turns over the years. These Ice Cool branded ones are a good example of how the people behind kool-aid really did s good job innovating flavors. As far as I recall these were characterized by the addition of peppermint, making them "cool". I believe the lemon ice ones were far better than the arctic green apple but both were pretty fun. And the drinks were both colored clear, always a neat trick. 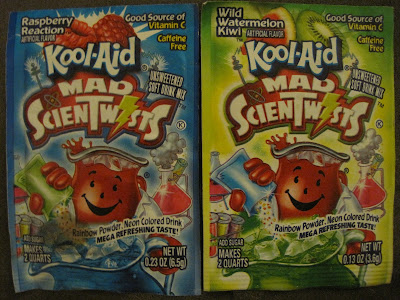 Here the kool-aid man has ditched the yellow jacket in favor of a lab coat. These are some seriously great graphics. Check out how excited he looks to be concocting these brews. I'm not sure how mad he really seems but I LOVE the lightning bolt through the logo.


Woah, very Jekyll and Hyde there in that ad. Pretty cool stuff :) 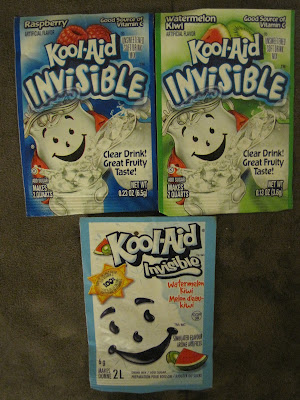 Just like the Ice Cool branded kool-aids, these invisibles share the clear liquid quality. Watermelon Kiwi is great and all, but this is really one of the only places I've ever seen to get straight Raspberry flavor kool-aid. Why they felt the need to go invisible on us with it is anyone's guess but I'm glad they did. 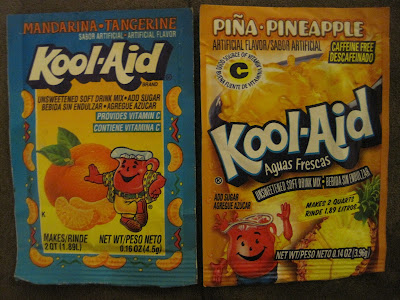 Finally I've got two random ones. The tangerine looks like ti could easily fit in wit hthe older style Island Twists, and I really like how they did the bordering on the packet. The Pineapple I believe is imported from Mexico. I'm a collector, but never to the point where I bought anything online, I found this Pineapple in a store myself just like all the rest. I like the Mexican packet design, if only because that is one seriously big glass of kool-aid in the background. 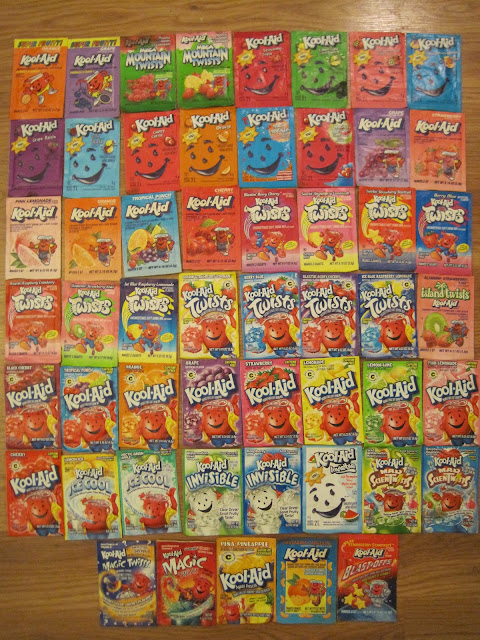 And here's the whole shebang, I stopped collecting sometime in 2010 after they officially discontinued the points program. Tha's a whole other topic that maybe I'll get into in another post though. Suffice it to say I was extremely bummed out that they stopped that, and now that kool-aid is down to only a few flavors tucked away shamefully underneath the Crystal Light its almost an embarrassment.

Think about how awesome kool-aid really was back in the day, a huge jug of kool-aid smashed through the wall shouting Oh Yeah! I mean that's pretty flippin amazing. And look at all these graphics! they are awesome. Oh I get it, I understand that people can't possibly intake that much sugar and feel ok with themselves anymore, it's a different world now. It just makes me sad... no more Sharkleberry Fin, no more Grape Houdini, no more Purplesarus Rex, no more Kool-Aid man. At least not for me.


In the end of course I still love Kool-Aid. I always will, but its a pale shadow of what it once was and that's sad. So instead of that, why not focus on the good. The joy that it brought to us all. Kool-Aid was a great brand. and even when I wasn't drinking it, it made me happy. That's a powerful brand, a powerful mascot. And for that I will always love and respect it. 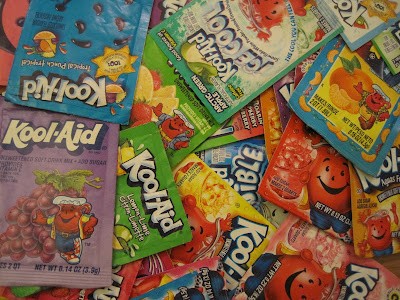