I'm a big Spider-Man fan, and I am kind of stoked about this new Amazing Spider-Man film. I admit that I'm not sure we need another origin story, but I'm definitely interested in what director Marc Webb and this cast can bring to the table.

So with that in mind I was definitely interested to see a few food items popping up in my local Walgreens. Probably the most prominent were the fruit gummys. And this really seems like a no brainer since there are already Spider-Man branded gummys, but what I really liked seeing was this: 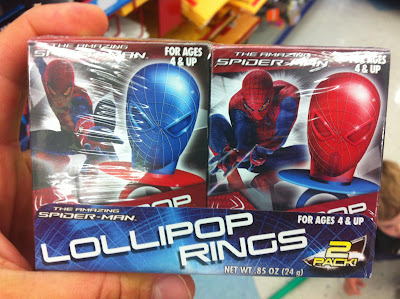 Who doesn't love a good ring pop?! Ok, try that again, who under 10 years old doesn't like a good ring pop? Exactly no one. Sucking on Spidey heads my seem odd, But I'd like to try it. Creating cheery candy based on what is apparently a pretty dark take on the character is a bit odd, and to prove that point check out the back of the packaging. 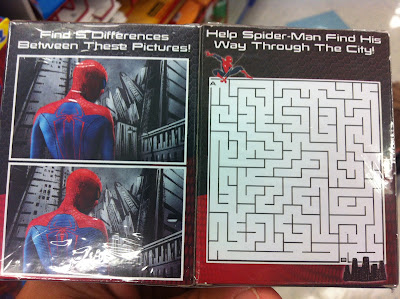 Ok so its fun and games... but man, is that a dreary picture or what. Its Spidey in front of a grey lifeless city, talk about depressing. Well I was never one to pass up on a good game. Even if I did always suck at those find the differences pictures. 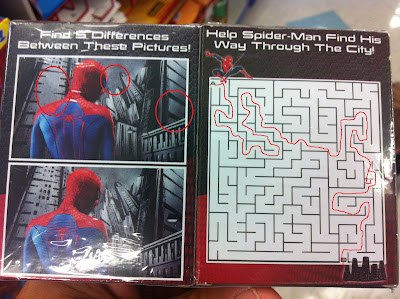 Yes I only found 3 of the 5 differences, but that was tough enough. Also there's a glare on the picture so :P As for the maze. I crushed it!

Anyhow, while I honestly would like to try out these ring pops, sorry "lollipop rings" , I certainly think that the candy and I hope the movie has a bit more character to it than this. I'm getting a bit down looking at these now. Until next time webheads.