Peanut butter, peanuts, nougat, caramel,and milk chocolate! sounds like a dream come true. it can only mean that its time for another review. Today we're looking at Snickers Peanut Butter. 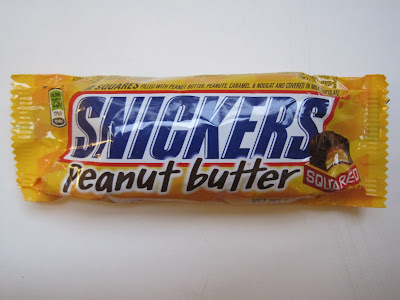 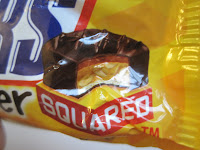 And lest we forget, this bar is "squared". Well there's alot to get into with this one so lets get cracking. Frst I should say that I am and have always been a Snickers fan. I like peanuts, I like their nougat, I like the chocolate. And although I am new to the Snickers Peanut Butter bar I AM a huge fan of Peanut Butter, so this is a mighty fine proposition. The fact that its in an odd square form factor doesn't so too much for me. Maybe its supposed to make it easier to save some for later... 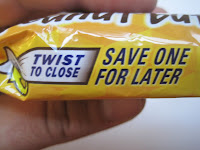 In fact that must be it considering the prominent "twist to close - save one for later" nonsense on the side of the packaging. Very odd.... My guess is that some marketing person somewhere told them that the anticipation for eating the chocolate bar is more important than the actual eating of it and they just rolled with it. Even though I'm married and consequentially legally required to share my candy (at least that's what my wife says...) I'm not really a fan of the trend though.

One final note on the packaging though. I seriously have always hated the SNickers logo. Its a stupid font and their choice of colors usually makes their candy bar look like a healthly power bar or something. Ok fine those things may not have existed when they Snickers was invented but they do now, and the Mars company would do well to at least consider something less tacky. 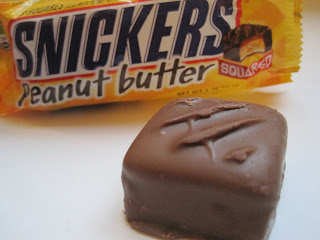 Getting the bar out itself the chocolate actually looks and smells pretty good. It may be a smaller size overall, especially since they get you on the spaces between the two chocolates inside the packaging, but the square really does feel square. its got a real width to it. and that kind of proportion makes it at least feel bigger. Of course this is a slippery lope and of course the next logical step.... cubed!

Alright, so moving into the bar. Here's how it looks bitten away. 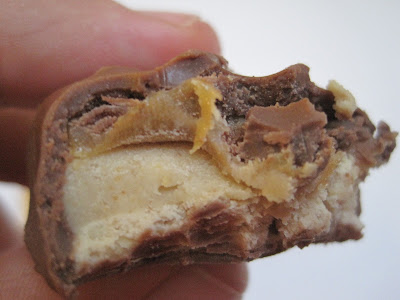 Hmm. Definitely interesting and not what I was expecting. the peanut butter is sweeter than I am used to. Not in a terrible Russell Stover peanut butter egg kind of way, but it feels like its might have a little extra sugar added. A bit more candy-fied than I'd prefer. Frankly since this is the star if the show I'm not too impressed. When I want peanut and chocolate butter I usually go for a Reese's Peanut Butter Cup, and this is definitely no Reese.From top to bottom in that picture above you'll see chocolate, caramel, peanut butter, nougat, peanuts, and chocolate. A few notes here, I'm not sure why they need peanuts if they have peanut butter. Isn't this bar for someone who doesn't want to deal with the full peanuts you find in a Snickers bar? It seems redundant on one hand, and alienating on the other to put them (especially just a few of them) in there. Next the caramel is not really up to par; like everything in the bar, its not so bad, its just nothing special. It doesn't melt o mix really well into the totally adequate chocolate.

This bar is fine, not great but fine. I think if I feel like eating a Snicker though I'll probably just go and get a Snickers, and if I feel like something with peanut butter and chocolate then I'll probably go get a Reese's Peanut Butter Cup. I don't see myself getting this again. I didn't hate it but its very middle of the road, and it had some real potential. 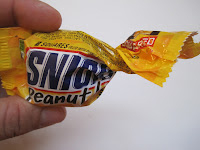 This is really a pretty weak 3 as well. Oh and in case you we're wondering. The twist and save some for later can be seen here. I was thinking it maybe like had a built in wire (a la a twist tie) in the packaging but no.... And because of that it just doesn't really work all that well. But I suppose that's pretty apt for this candy bar.Hopefully I'll get something a bit better next week.