Its review time again, and today we're looking at 100 Grand. 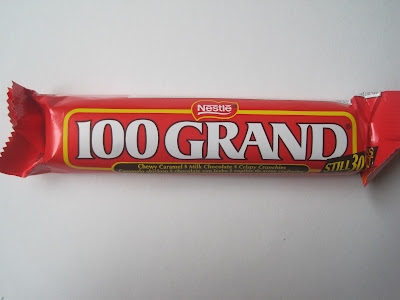 Now I know this chocolate bar has been around for quite a while, but I have never had it before. Why you ask? well, growing up in Canada we just must've been deprived ;) No really, there we're actually quite a few chocolate bars, especially on the Nestlé slate that we didn't get up north that are common in the States, and 100 Grand is one of the big ones.

For some reason I've never been attracted to the 100 Grand packaging. I don't really know why, there's nothing really wrong with it, I just don't like it. Red with white writing, seems plain enough. Maybe its the stupid yellow border that bugs me. If its trying to evoke a "richness" then I don't think its doing a good job. On the packaging it describes the bar as "Chewy Caramel $ Milk Chocolate $ Crispy Crunchies" and I have to say I am a bit charmed by the use of dollar signs to break up the description. 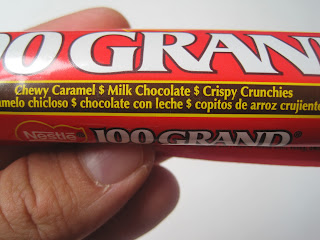 Onto the bar itself, this is one of those chocolates that gives you two for the price of one, which is generally a good thing. However since this chocolate bar is on the small side in general, cutting it in half seems a bit silly. Would only one of these halves be enough for a person. I think more likely you'd eat it all anyhow. Oh well... Aside from that, I think it looks good. Lots of crispies on the outside make me think of a Nestle Crunch bar, only perhaps with smaller more jam packed rice crispies. The chocolate smells very strong, and very rich. Overall the bar itself makes a good impression. 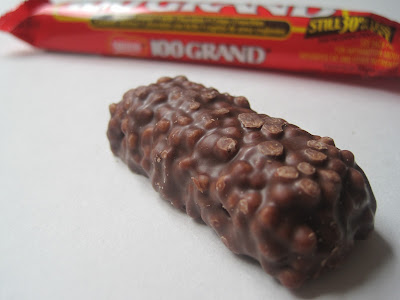 Biting into the chocolate bar there are a few things that happen at once. The caramel is thick and prominent. Its not too thick, I'm just surprised at how much there is in the bar. Its a big lump of caramel covered on three sides by a relatively thin layer of chocolate and crispies. Like I was saying though the caramel is abundant, but good. It pulls well and has a good consistency and flavor. The chocolate is rich but not too notable since there is so much caramel. But the flavors mix well together, and the crispies especially add a nice texture to the experience. Frankly this is a pretty darn good tasting chocolate bar. 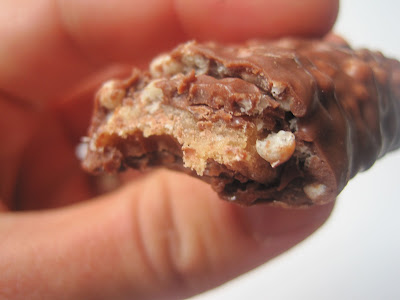 Despite my initial misgivings I think this is one you should try out. The flavor speaks for itself. I don't know how "rich" the bar really is, but I really am pleasantly surprised at how much I enjoyed this chocolate bar.

100 Grand is a product of Nestlé, please find out more over at http://www.nestleusa.com/.
Posted by Geoff at 6:00 AM