Well here we are again in my ongoing series talking about some of the coolest old candy ads out there. Today I'm continuing on talking about some old bubble gum ads I found among my comic books. If you haven't yet, please go check out part 1 where we looked at 3 awesome Bubble Yum ads.

Today though we're starting with the other big dog in the gum world, at least for me, Hubba Bubba. 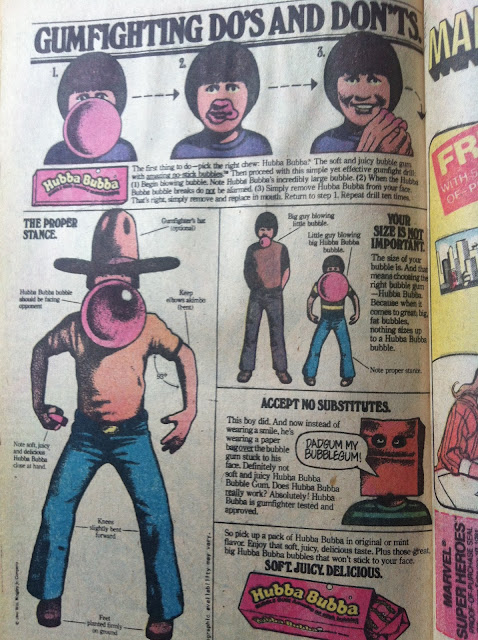 Talk about your wordy ads. This is like a novel. I'm not sure what the Wrigley people were thinking when they approved this ad, because it is way too busy. Ok though, lets have a look at this: Gumfighting Dos and Don'ts. That's pretty cute, I can imagine the tv ad for it now, an old west showdown. That's pretty cool. Their big selling point though is definitely the "no stick bubbles" which is of course trade-marked. I know I hated when gum got stuck to my face, so they have a point, you need a good gum for avoiding that. But for all of these kids bubble gums, I don't think any of them stuck to your face, it was only adult gum that did that. 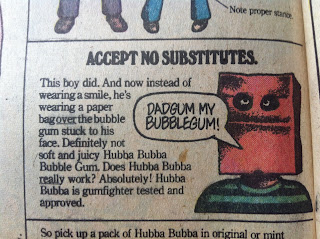 I like the gumfighting stance, the 93 degree arms akimbo (by the way dummy, that means bent). And I really like the paper bag kid. He just can't win when he's not using Hubba Bubba. Its obviously a pretty sorry fate to those people silly enough to try gumfighting with another brand.

Finally I'm kind of amused that Hubba Bubba only comes in Original and Mint flavors. Seriously, mint? That's not one I remember...

The same unfortunately be said for the next ad, for Bonkers! 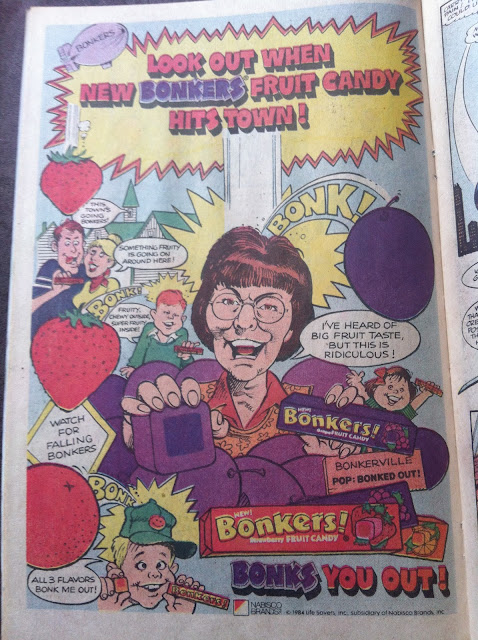 Bonkers is not gum. Lets just get that out of the way. Its a chewy candy that looks an awful lot like gum. I'm trying to remember what it tastes like, but while I remember the commercials, I can't actually recall if I actually ever had it. It was a Nabisco product that had its time in the 80s and then ran its course. The commercials on tv had uptight people eating the candy and then going nuts as it "Bonks You Out!", this was often accompanied by a huge piece of fruit landing on them. I think that's what this ad is trying to show us too. The person in the middle here is a cartoon of the spokeswoman for the candy. It always amazes me to think that there was a time when it was hip to have old people as your spokesperson for kids. Maybe it was a reaction to the Where's the Beef? lady.

Anyhow, the ad is fun, if a bit busy. It takes place in the town of Bonkerville where the population is "bonked out!" from all the fruit falling from the sky. Notice the blimp in the top corner there... do you think they're suggesting that the blimp is dropping the giant fruits on people eating Bonkers? My guess is no, its just a weird magical phenomenon that when you have this candy giant fruits fall from the sky. Speaking of which, why would anyone eat this thing if they knew they we're going to get clobbered with a giant strawberry or something? I know they always seem to end up laughing, but I would be scared of huge falling fruits. Here's a question for you, since there are 3 flavors, which one would you rather have fall on your head? giant strawberry, giant grapes, or a giant orange? My vote is for grapes, at least then you could dodge and weave in-between them.

The last ad I've got for you is a two in one for Rain-Blo and Super Bubble. 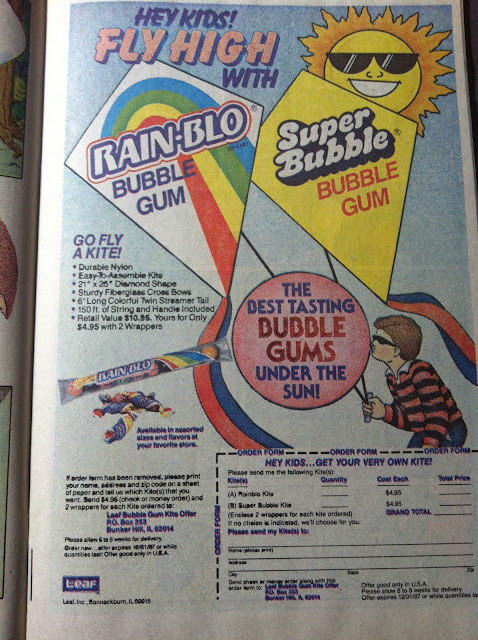 These are both third rate gums in my opinion, and the ad is cheap, BUT I do like kites, and this is giving me a chance to get a cool one, even if it has a lame brand on it. I was always a sucker for mail-away offers, even if the product was a bit weak. The kits sound good: made of nylon with a fiberglass frame, a streamer tails. That's a pretty classic design. But $4.95 plus two proofs of purchase? that's too much for this. I'm pretty sure Rain-Blo were the hollow gumball style gum that you'd get at halloween in 3 packs, but I never bought the stuff intentionally. As for the kite, yes its cool, but no its not worth the cost, especially if you have to buy the gum.

There's not much in terms of the picture on the ad. Although that kid is pretty multi-talented, flying two kites at once with the same hand, while blowing a bubble, all the time wearing his sunglasses. Honestly he's kind of an ass with those shades on. We'd have to get James Spader to play him in the movie.... maybe the gumfighter kid could come by and kick his butt. Now that would be entertaining.

Rain-blo and Super Bubble are still around. It was bought from Hershey in '03 by Farley's & Sanders Candy Co. My vote still remains that you should stay away from them though. There are better things to eat out there.

Alright, thats all I've got for today, I'll have another post next week looking at some fun Kool-Aid ads! Until then keep those arms akimbo (that's bent dum dum...)
Posted by Geoff at 9:00 AM