Again we find ourselves here to take a look at some fun old advertising. Today we;ve got two fun ones for something that again is not specifically technically candy, but I feel like falls into the same catagory as all the best candy: Kool-Aid!

Sure as a kid I always liked Kool-Aid, but I rarely got it at home. I'd have to go to friends house to actually drink the stuff. Mostly Kool-Aid was famous for the awesome advertising. Who else had the guts to have their mascot break through walls every commercial?! It was genius.

So I've got a bit of a weird relationship to Kool-Aid now that I should probably disclose. So I really got into Kool-Aid in my 20s after I'd moved to California. I started reading the X-Entertainment blog and just loved the way Matt wrote up his Kool-Aid reviews. The guy has honestly been a blogging inspiration for me. Anyhow, I started actually collecting the different Kool-Aid packages myself because I loved the artwork so much, I think I have around 40 or 50. One day I do a post here just showing off the collection, but that's a different post. My point is, that I love Kool-Aid, even though my wife and I decided to cut it out of our lives a while back (even made with Splenda its just a heck of a lot of sugar), I have a deep and lasting affinity for all thing Kool-Aid.

Speaking of the Kool-Aid, and the Kool-Aid Man, lets get into the ads... Although you'll see he is breaking his way into both of these ads in typical fashion oddly enough neither ad is actually for Kool-Aid the drink. 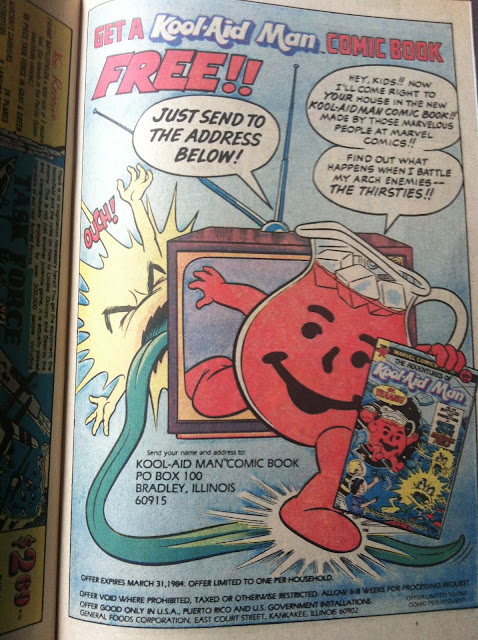 Kool-Aid man had a comic book? And its free? Why didn't I know about this before? Maybe when I read this ad as a kid I didn't put one and one together but a Kool-Aid Man comic sounds awesome. He's taking on the evil Thirsties, who look a lot more like electricity with a HUGE green tongue and I think that's great. Not sure why exactly he's coming out of the tv... oh wait, he's coming out of the tv and into the comic book you're reading the ad in... very high concept there. Anyhow it looks very kool. I wonder if he actually steps on tongues regularly in the comic... like is that his power. tounge stepping? Sure he'd be pretty heavy and all but you'd think a giant talking pitcher of Kool-Aid could work something more magical than a tongue stomp. 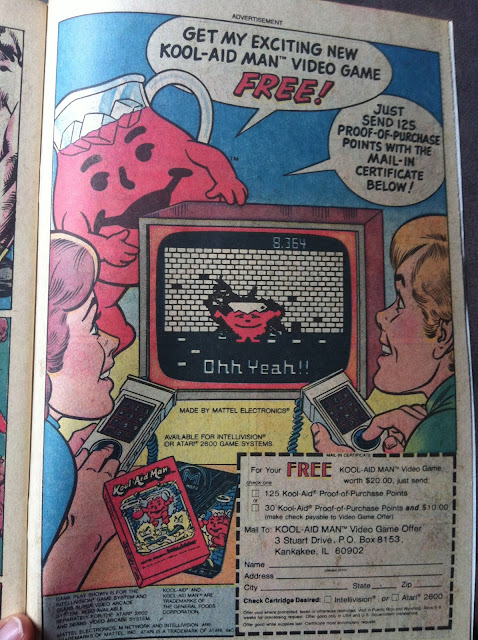 And the next ad is pretty awesome as well. I totally want to play the Kool-Aid Man video game. 125 points is not that hard to get. Especially if you find some double points packets. Also theres a 30 point + $10 option which makes it much more affordable to kids. Not that I had an Intellivision or 2600 (we had a Vic 20, then went right to Commodore 64), but I definitely want to experience the thrill of breaking down a wall and shouting "Oh Yeah!!" in game format... Here's a look at some of the gameplay I found on YouTube.

Seems pretty awesome. Even though I don't totally get whats happening, I know I want to play it.

That's all for the ads today, next week I'll be back with a few classic ads for M&Ms.
Posted by Geoff at 9:00 AM