That's right the 3rd week in March has been dedicated to American chocolate, and reportedly you'll be able to find deals around the internet and in stores on classic American chocolates.Sounds pretty fun to me, so in honor of that I've got a quick bonus review for you today, probably the most iconic of all American Chocolate's Hershey's Milk Chocolate bar. 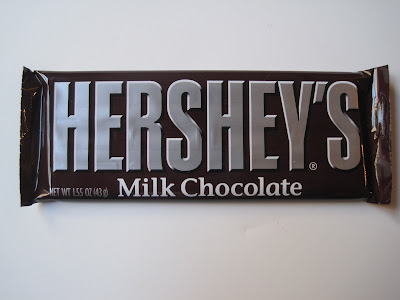 Now I know even though this is a classic it sometimes gets some flack. The Hershey bar has been around since 1894 and, according to wiki, are known to be cheaper to produce than European milk chocolates because they use a processing that makes it less reliant on fresh milk. While that sounds kind of gross, we've probably all eaten and enjoyed a Hershey bar at some point. I'm sure its no worse than putting fast food in your body. Also it's not just that we grew up with them, but they're a part of Americana. There is no denying they're lasting place in the history of this country. I'd put them right up alongside Coca-cola as a part of the fabric that makes up what people consider to be definitively American. So on American Chocolate Week of all weeks, let's give them a fair shake. 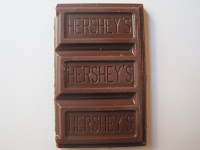 Getting into the chocolate itself, the bar has some nice design work with the logo pressed into the bar, and easily breakable squares for bite sized treats. Its not new, its just nice. The taste, well it tastes like some pretty standard mid level milk chocolate. It's definitely not bad; I mean it is milk chocolate, but I'll admit there is a hint of chalkiness to it that I'd rather not taste, and I don't feel like you see it in European milk chocolate. I've read that Hershey bars have a certain tang to them due to the processing but maybe I'm just too accustomed to American chocolates because I honestly don't taste that. I will say that it could be smoother though

Overall I can't say I'd be running out to buy this bar regularly, but if you wanted some easy chocolate to bake with, something to break up into cookies, or maybe for some s'mores I wouldn't hesitate to pick up a Hershey's Milk Chocolate bar. 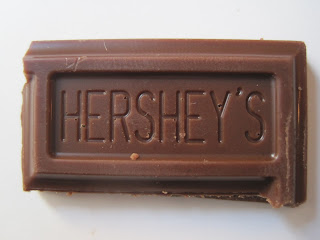 This chocolate is manufactured by The Hershey Company in Hershey, PA, learn more at http://www.hersheys.com/