Every year it seems like there are more and more licensed Halloween products on the market. In a way I can't begrudge them, I mean this is one of the most commercialized holidays of the year in general. Why shouldn't we get Spongebob candy if we want it.... its not like you have to buy it.

For me though I think I'd prefer to stay away from these candies. I personally usually go for the mix bag of mini chocolate bars to give out at the door. Just good classics like Reese's Peanut Butter or something. We'll see what I end up with this year.

Check out some of these licensed Halloween candy bags. 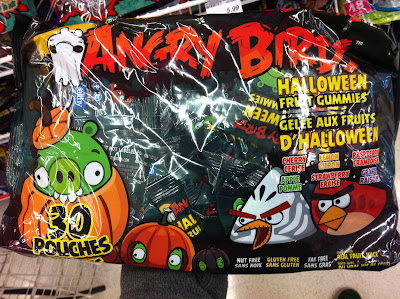 I'm a fan of Angry Birds as much as the next guy, but they are everywhere. Kinda turns me off a bit. I do like the pig in a pumpkin though. When it comes down to it also, these are fruit gummies. No kids wants fruit gummies for Halloween, its about as good as raisins.

Have you all 3-starred the Angry Birds Seasons Halloween levels??? 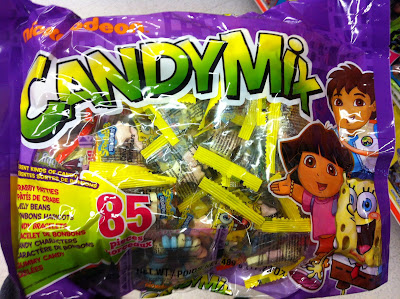 Well here is a variety of licensed characters, appealing to the younger crowd. Dora and Diego have always bothered me but I'm a Spongebob fan, so I guess I'm mixed on this one. Looking at the variety of candy though I have to say I'm impressed. These aren't the stars of your candy haul, but I'm not going to shake my head at a candy bracelet, or some jelly beans. 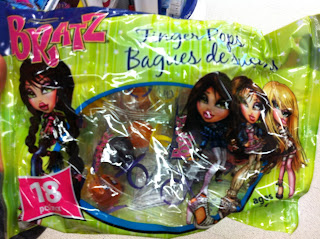 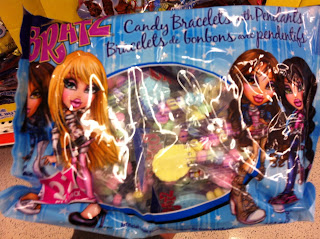 Ok, so here I do have a problem. Firstly and really most importantly, to the best of my knowledge Bratz are seriously on their way out, you know they jumped the shark when they had the tv show, or was it a movie... Anyhow, I don't know that there's been anything new to come along and fill the tween girl (who still likes dolls) spot but this is definitely passe. I wouldn't be surprised if this is the last Christmas where you even see Bratz.Its all La la Loopsy (sp), and Tinkerbell now. Aside from that little rant (sorry) This candy is so girly wth its branding that its immediately going to annoy boys. I mean they wont throw it away because of it, but even if this is the best candy bracelet ever, boys will be ashamed about enjoying it and quickly hide the packaging. Finally, in all honesty, everyone knows that Ring Pops are just plain stupid. 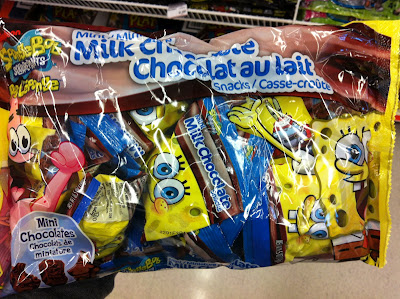 Spongebob, I'm behind you 100%. Just simple, Spongebob and Patrick, and its chocolate. Probably low quality chocolate, but I think I would enjoy biting Patrick's head off, wouldn't you? 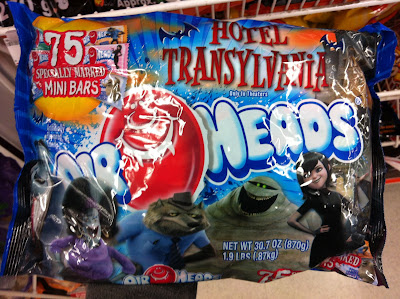 I'm not really an Airheads fan, but I did see and love Hotel Transylvania. I think once kids see that film they will really dig it. I like this tie in, I mean it seems kind of random in a way, but I like the fact that Hotel T is branding themselves somewhere, and I think its good for Airheads to get a bit more exposure. Also its new, its hip (theoretically) and if the movie does well with kids then this is perfectly placed to do very well at Halloween. 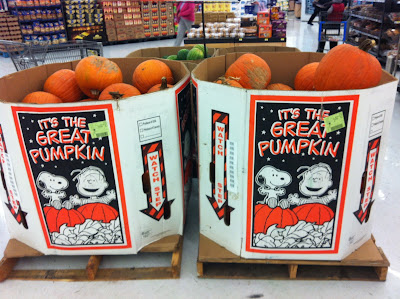 Finally I know its not candy, but these actual pumpkins are branded with Peanuts characters! That's pretty serious licensing :)

That's all I've got for now, as we get closer to Halloween I may find some more licensed stuff to post. Until then let me know if there's any candy you would buy immediately based on a license? or any you'd avoid?
Posted by Geoff at 6:00 AM