Another day closer to Halloween, and I've got another review for you. Today we're looking at Original Foods Marshmallow Brooms. 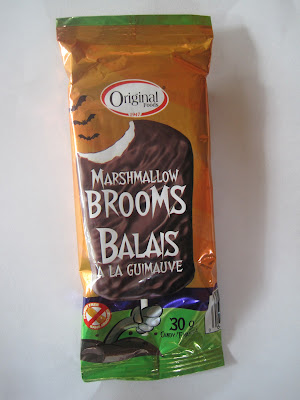 I'm not familiar with Original Foods, but I suspect I will be soon enough. They're a company out of Quebec who make a variety of confections. Since I've been living outside of Canada for some time now I haven't come across their stuff. From their website it seems like they specialize in caramels and seasonal candy. This seems as good a place as any to start.

This is kind of a unique idea. Putting a marshmallow treat on a stick is smart. One of the biggest problem with marshmallow candy is the mess, so I'm already liking this. The design is simple, although I'm not sure how much it looks like a broom but its Halloween, and you've got to give them a little leeway in creative marketing. 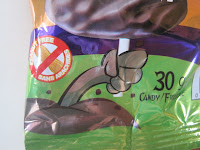 The packaging is really nice, I like the cartoonish design, the colors are all very Halloweeny, but not too dark.  The bats are a nice touch too, but I really like the zombie hand coming out of the ground to hold up the marshmallow broom. Its pretty adorable. Sure, I know zombies would have no need for a broom (they're not known for their cleanliness, or a marshmallow broom, since I'm pretty sure they like to eat brains instead of marshmallow, but I'm still going with it on the cute factor. Very nice job. 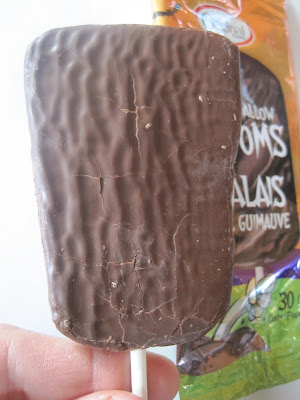 Getting the bar out of the packaging you can see that the chocolate has a nice dappled effect over the marshmallow. Its surprisingly small in comparison to the packaging. They probably could've shaved a half inch off the wrapper. I'm not a fan of the practice (also heavily employed with potato chips selling bigger bags half full of air. But looking at the bar, its not really all that bad. I like that the shape is at least somewhat tapered. That's at least sort of broom-ish...They could've added some broom touches to the outer design work, but for less than a dollar a pop, I can't blame them too much for keeping it simple. The important thing is how it tastes. 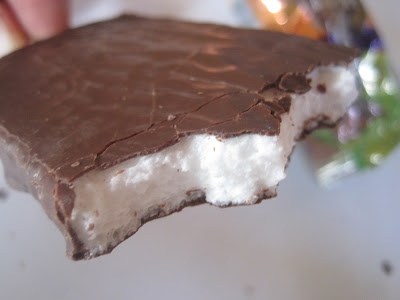 And the taste is not so great when it comes to it. This is cheap, and you can taste it. The marshmallow is cheap, the chocolate isn't very good, and too thin to really make any difference, and the overall effect is just unpleasant chewiness.

Marshmallow is a temperamental thing in candy. It works best when paired heavily with something else. Since the chocolate here is so thin, and indistinct the marshmallow has to stand on its own, and it just doesn't have the muster to manage it. Actually I will say one more thing about the chocolate, its kind of chalky. And to be honest this marshmallow tastes about one small step above what you'd find in your average bowl of Lucky Charms. In other words, its crap. This isn't actually offensive, but you certainly shouldn't bother getting it.

Marshmallow Brooms are an Original Foods product, you can check them out online at http://www.originalfoods.com/
Posted by Geoff at 6:00 AM