By now we all know about Cadbury's Screme Eggs out for a limited time this Halloween. If for some reason you don't though, please take a second and check out this review.

Ok, so now we're all here and on the same page its time to check out this awesome Screme Egg offshoot. Amazingly the good folks at Cadbury aren't satisfied to just bring Screme Eggs out. Nope, they've gone all in with the scary stuff this year and launched the Screme Egg snack cakes! 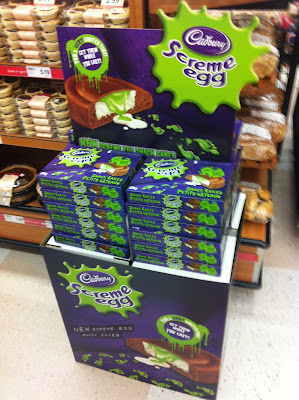 Amazing, I know! Check out the front of the box. 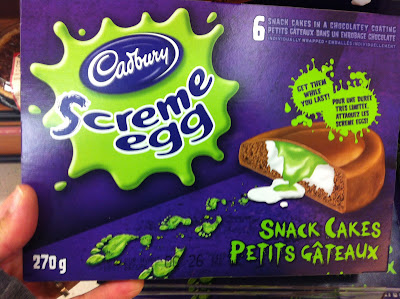 It looks like they only come in these 6 packs, I tried to find a single serve around, but had no luck. Its got as you can see much of the same design as the Screme Eggs. Bright purple, with the green goo splat, and in this case mysterious footprints leaving the scene of some sort of snack cake crime. Very scary stuff.

On the back of the box we're treated to even more awesomenes. There is a full comic, explaining the origins of the Screme Eggs. How cool is that?! 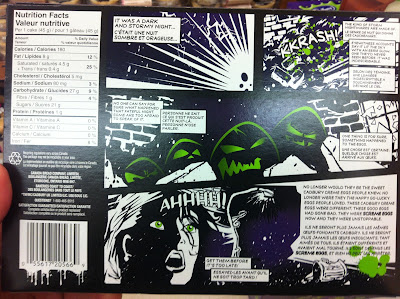 Feel free to click and embiggen if you want to read it, basically though it says that something happened one night, something indescribable. And it turned all the good Creme Eggs bad. Now they are on a rampage! Its pretty much the most awesome origin story ever for a candy egg.

I love how spooky these guys look! It says in the comic "Get them before its too late" but on the front of the box it says "Get them while you last" That's pretty scary awesome. I mean obviously these killer eggs are out to get me. I suppose my only option is to try to eat them before they get me.

Fantastic stuff. This is just enough of a light backstory to push these into the top tier candy category. Why aren't there more stories for candy?? I love it.

Expect a review of these tomorrow on the blog.