Here we are once again with a fun Halloween review for you, and today we're looking at the Russell Stover Milk Chocolate Pumpkin. 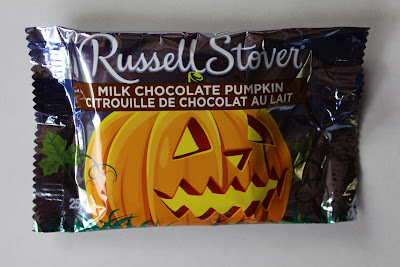 I've reviewed Russell Stover products here before, and generally they do a good job of it, but this is my first time just reviewing their straight milk chocolate. Does this constitute a review of the base Russell Stover chocolate? I don't know. They might use cheaper or different chocolate in their pumpkins than they do in say their boxed fancy milk chocolates. I just can't say. I think for now though we should just treat this as a one off look at this specific confection.

The design is nice. I like the pumpkin on the package. He's pretty creepy, and the colors are all muted. Especially with the leaves and grass around him it looks like he's still in the pumpkin patch at nighttime. Definitely creepy stuff. Although who would carve and light a pumpkin while still leaving it in the patch is beyond me. 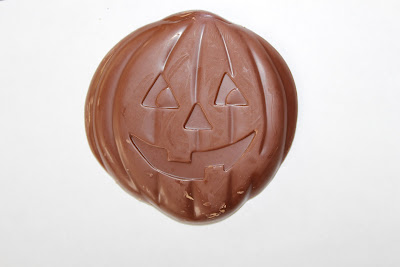 Moving onto the inside of the package we find the chocolate pumpkin itself. This is a rather thin chunk of chocolate, but I suppose it was pretty cheap. And if its rich you probably don't want too much. I  like the pumpkin design, and despite a few flaws in the manufacturing it definitely looks like a jack-o-lantern.

The weird thing though is that the pumpkin on the inside doesn't look anything like the pumpkin on the outside. Somewhere along the lines there were some conflicting messages here. Do they want their pumpkin to be scary? or friendly? This guy on the inside is decidedly goofy looking. Frankly I like silly pumpkins like this, but its not at all what sells you on buying the chocolate on the package. Definitely a disconnect. 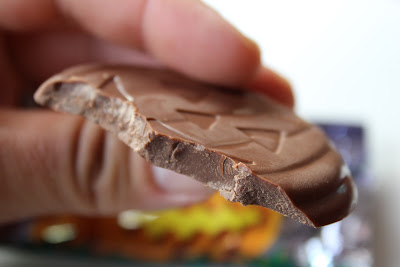 Getting into the chocolate itself this is pretty much right down the middle of the road alright.. well, maybe its a bit on the better side of alright but its nothing too special. The chocolate has a slight creaminess to it, and its not too sweet which is good. I also like the texture, it melts in your mouth but not too fast. Basically it tastes like ok chocolate. This isn't anything too fancy but its not bad.

Well I'm sorry this one was so anti-climactic but that's just what you get sometimes. I don't think I'll be rushing out to get more of these but I wouldn't say no if one was offered to me again.

For more from Russell Stover please check out their website http://www.russellstover.com/
Posted by Geoff at 5:00 AM