The time has come, the blogger said,  to talk of many things, where chocolate bars, and candy lurk disguised in odd forms like Big Turk. 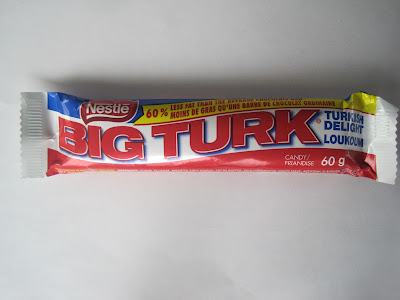 Welcome to another review from Walking the Candy Aisle. Today we look at that oddest of odd Nestlé bars the Big Turk. As far as I know this is only made for the Canadian market. Does Canada have a penchant for Turkish Delight that I didn't know about? Perhaps, because I can't think of a single other instance of the dessert being made so readily commercially available. Oh I've really nothing against it in theory, but isn't it like say finding baklava at every corner store? Not something you'd normally expect.

Yet here we are, with a red white and blue package that reminds me of Bazooka Joe gum, or if not that then a tube of toothpaste. The name doesn't seem to fit though. "Big Turk" sounds blunt, very deliberate, and possibly a touch racist. Turkish Delight is something incredibly refined though, at least as far as I recall. Actually all I can seem to remember about it at the moment is that it's the dessert that Edmond went crazy over in The Lion the Witch and the Wardrobe. Anything that could make someone turn on their family though must be pretty serious. For some reason I think it may be Russian, and not Turkish... maybe I should just look it up.... but where would the fun be in that. 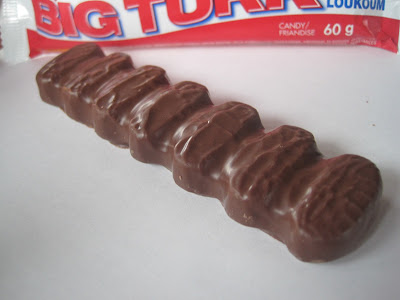 Again, very odd.Just look at this design! Rounded bits must be shaped like this so you know how much to bite off at once, right? The bar has a smell too... kind of fruity. I believe Turkish Delight is kind of gummy, and I remember that it's purple, but I don't actually remember the taste is like though.

If you watch the video review you'll see how this bar has a bend to it as well. It's solid, but a bit... floppy. I've got to just get into this one. 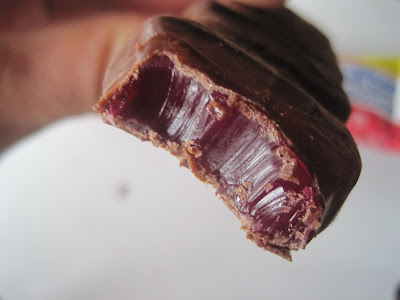 Biting into a Big Turk, the first sensation is... gumminess. It's not as sticky or chewy as say a gummy bear, but it has many if the same qualities. Immediately you'll see that your teeth will slice through the slightly more gel like substance of the Turkish Delight than a normal gummy product. There's a familiar initial chew, but after 3 or 4 chews it will al kind of dissolve away. Yes you'll still find gummy bits stuck in your teeth, but its not as annoying as a gummy bear, this is a candy that will dissolve given a little bit of time. The texture is definitely different, but is that enough?

Well from there you have to look at the taste. The chocolate on the outside isnt exactly negligable, but its so slight you'll find that after the first chomp into the bar it dissolves away so quickly in your mouth that it makes no difference. That's not a terrible thing, I mean people are here for the Turkish Delight, not the chocolate but it does smack a bit of Nestlé hedging their bets on this bar. Can't the Turkish Delight stand on its own?  or would it just get too sticky in a wrapper alone? The Turkish Delight has a taste... like some kind of berry, kind of between a cherry and a grape. Its probably like an Asai berry or one of those ones that we all only kind of know. Any which way, the whole thing is indistinctly fruity, but overall pleasant.

Ultimately this isn't bad, but its really not for me. I don't hate it, but I can't see myself turning over my entire family to a Snow Queen for some more.  The taste just isn't enough, and the gumminess isn't that special. I give it points for originality, and that's probably what's bumping this up to the next point level, but in terms of taste this is something I say you can pass on.

For more on Big Turk, you can check in with the Nestlé Canada web page right here.
Posted by Geoff at 6:00 AM