Today we've got another Christmas review for you, lets look at the ever popular holiday favorite Turtles. 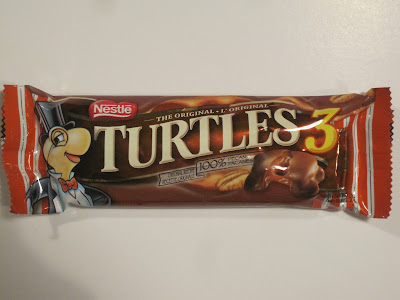 While technically this may not be a holiday themed treat, for some reason it is heavily marketed at the holidays. Perhaps its the odd inclusion of pecans as the central nut... Would consumers not accept pecans at other times of year? It seems like we're ready to have all sorts of nuts at the holidays. Kinda weird. Anyhow in case you were wondering, while this is branded under the DeMet's Candy Company logo elsewhere, here it is a Nestlé product.

Looking at the package I have to admit right off the bat I'm a fan. While I don't usually go in for the corny old timey 1920s look of red and white (or silver) stripes, this has a classiness that is somehow charming. Possibly I'm just used to seeing it every year for my whole life so I don't mind. Either way I think the effect works, especially around the holidays when everyone is a bit more lenient on cheesy stuff. 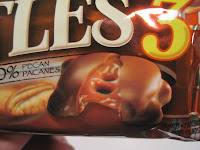 If you haven't had it before, this is a chocolate filled with pecans and caramel. Its designed to look somewhat like a turtle. And although there have reportedly been a few attempts at making it more distinctly turtle-like over the years for the most part you'll see Turtles as they appear on the package, kind of blobby and mounded with a few protrusions. I like how on the packaging picture you can see the caramel dripping. That kind of gooey-ness is exactly what I'm looking for. 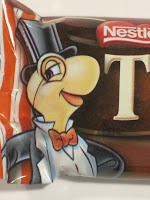 Looking at the other side of the package we see what is possibly one of the coolest mascots ever. Its the fancy Turtle guy. Now obviously this guy just exudes class. Top hat and tux, a red bow tie, and to complete the ensemble an actual to goodness monocle! Why don't all turtles dress up like this?! Its hilarious and adorable. I mean this guy, Mr Monopoly, and Mr Peanut should definitely be hanging out. It all totally works for me.


Over at the DeMet's website you can also get a full view of him, and he is totally awesome :)
Ok, let's get into the actual chocolate here. As you can see its not too big, definitely smaller than a candy bar, but its bigger by far than your average box of chocolates chocolate, and at the holidays that's what Turtles will be directly competing with. I also appreciate that there are three in each package; its tiring seeing how many chocolates have transitions to two small halves of chocolate in every wrapper. 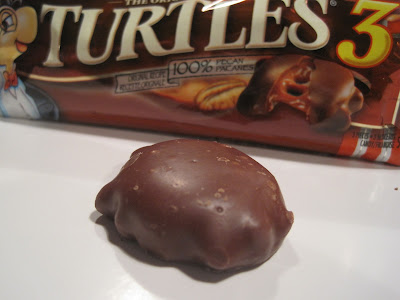 Biting into the turtles, we get into the goods... or not so good in this case. The chocolate is totally unremarkable, the caramel is not gooey, despite the promises of the packaging, but the pecans are the biggest problem here.

I wondered earlier to myself why there weren't more candies and chocolates based around pecans. I mean peanuts just totally dominate the field... Where are the cashew, or walnut, or pistachio flavored chocolate bars? Well if this is an indication, I think I know. Those other chocolate bars don't exist because peanuts are simply way better when paired with chocolate than any other nut. Case in point, this turtle tastes pretty bad. 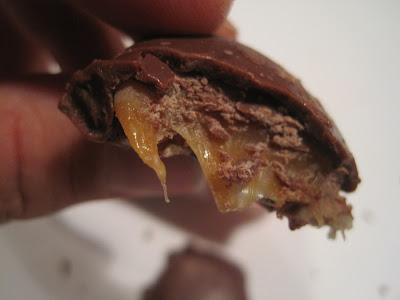 Perhaps bad is too harsh a word for it; this is more a case of a totally unexciting chocolate. There's nothing to engage with here, the chocolate isn't terrible, but isn't anything special. The caramel isn't gooey, but it is sweet and its not like rock hard... I just am not digging the Turtle at all though, there's nothing grabbing me and saying 'this is where you're supposed to be paying attention and caring!' I have a sinking feeling that this would be a pretty decent chocolate if only it was filled with peanuts instead of pecans.

This is  a disappointing chocolate through and through. I don't think I'll be getting this one again, and suggest you skip this one for your holiday treats.

Turtles are a DeMet's Candy Company / Nestlé product, please find out more about them at http://www.demetsturtles.com/
Posted by Geoff at 6:47 AM