So many old ads so little time, as we roll on with our series check out these awesome retro candy ads :) 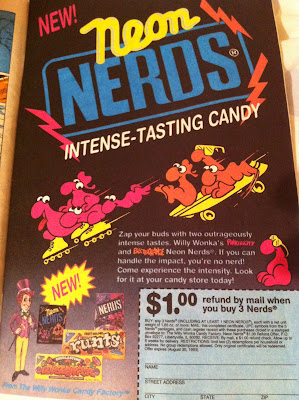 Well this Nerds ad can't be that old can it. They've go the Willy Wonka design on it. But I love the "Intense" design for this super Intense -tasting candy! Neon Nerds! Can you get any more 90s than that! I mean neon in general is awesome, but by making our candy neon you've stepped into truly radical territory. And to top it off, in true 90s fashion the ad features some totally 90s extreme sports. Skateboarding (note the old school board) and inline skating. Totally tubular! Below the graphic the cool neon pink sunglass wearing Nerd lets us know about the new flavors - Pinktricity and ElectricOrange! this is some truly amazing design and marketing work. Then to top it off you've got a rebate coupon, giving you absolutely no reason not to try these awesome new Nerds. My only real complaint here is Wonka showing up. As much as I like the guy, its conflicting imagery to have him stumbling into the middle of my Nerds ad. Still, overall this is an amazing 90s advertisment. 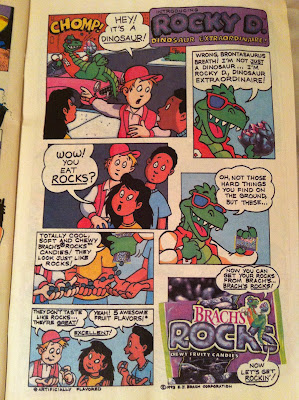 Next up, we've got Brach's Rocks candy. Honestly I've never had this before, in fact I don't even remember if I've ever heard of it before, but I definitely like this ad. Rocky D. Dinosaur is obviously a totally cool dude. I mean he's wearing a letterman jacket, and sunglasses! How could he not be cool. He's definitely the James Spader of 80s candy icons... kind of  a prick, but you love him anyhow. And look, he's actually chilling out on the hood of a pink Cadillac. I can't decide if this is more of a Denver the last Dinosaur ripoff or a Cadillac's and Dinosaurs ripoff, either way, its pretty awesome. Honestly the candy is secondary to the mascot in my opinion, Sure Rocky, you want me to eat rocks... ok, I'm down with that, lets just hang out and look cool together ok? 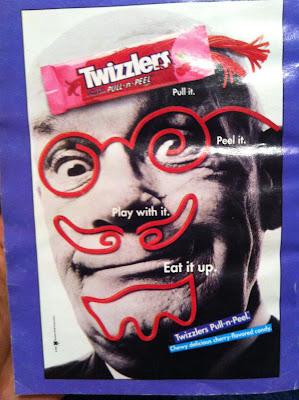 Finally today we've got a fun, and relatively simple Twizzlers ad. It takes the simple defacement of a poster to the next level. Fun, witty, devilish, and just the kind of play with your candy that every kid loves. I love the fact that Twizzlers are a playable candy. It just adds a whole other dimension to the fun of eating it. This ad is great at playing up that angle. I remember distinctly when the Twizzlers Pull-and-Peel was introduced and this was really a big deal in the licorice world. I'm not even a licorice fan and I knew about it. The one other thing that has to be noted here is something I don't think I would've noticed as a kid, but that guy, the face... its pretty funny to start with. Is that guy someone I should know? If he is I've missed it. He's definitely got a great look though, and defacing his picture makes it even more fun :)

These ads are from X-Men Adventures #9, and Jughead with Archie digest #124 respectively.
Posted by Geoff at 6:00 AM