The funniest thing about these old ads for kids cereal is that they really take the format in a weird direction. Either of the two ads I've got for you today could've been directly lifted from a tv spot. They play as full blown action. I get that they may not be used to doing print advertising but this is a bit silly. Sure you can tell a story in a comic, but these seem to go overboard. How much time do they expect kids to invest in their ad??? 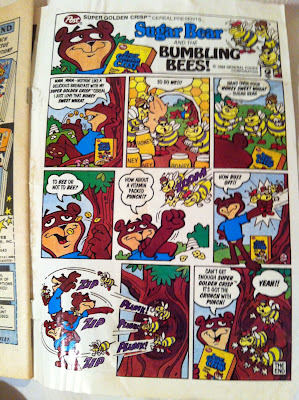 Ok, so color me crazy. I just looked it up, you know just in case... and I'll be damned but this actually WAS a real tv commercial! check out the vid below, it runs from :04 - :24


So what's the game here? I mean why put basically the exact same ad in comic form as is on tv? Is it just laziness? Did they think this was really the best way to get to kids? There are a few more mentions of "Honey Sweet Wheat" in the comic ad, and the tag at the end of the commercial "Now with more honey" is missing but otherwise its really the same.Sugar Bear is still a bad ass mofo kickin some bumblin bee butt... I guess I'd rather see something a bit different, maybe that played more to the medium of a comic more. Don't get me wrong, this is a good little story, but I bet you could do the same thing in one cool splash panel or maybe 2 or 3 frames at most. Then you'd really be doing something impressive. 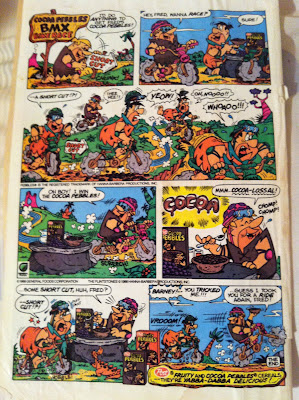 Of course now after knowing that I should be looking for it I have to assume that this Cocoa Pebbles ad is also a direct tv port. Both are Post cereals from the same comic so I guess it makes sense. Maybe they even had the same ad guys working on it. I can't for the life of me find this specific one but I'm sold that it must've been one. Check out the super sweet Fruity and Cocoa Pebbles commercial compilation.


I love how all the modern ads are kind of the same deal. Barney tricking Fred with some topical yet totally cockamamie disguise. These are real classics. Also I love how at the end of most of the commercials they insert a shot of a real bowl of cereal against the cartoon Barney and Fred running away in the distance. This is classic advertising and I have to say I love it.

Both of these comic ads are from the same issue of the Archie comics Laugh line, issue #14. Nest week you can look forward to some more straightforward candy advertising. Until then, stay hungry.
Posted by Geoff at 6:00 AM