Today is Free Cone Day at Ben & Jerry's scoop shops around the world! 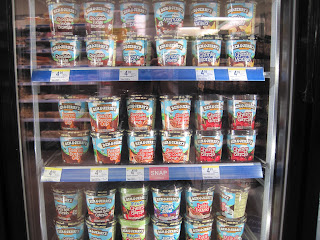 That's right, if you've got a Ben and Jerry's nearby, you should definitely head out there between 12pm - 8pm and pick up a free ice cream cone today. Come on people, its free! I am a  fan of Ben and Jerry's, and have been since I was a kid. It was such a special treat to get some Ben & Jerry's ice cream, whenever we went to the States. Yes at that time they didn't exist north of the border, now however they are really all over the world. But I distinctly remember driving through New England as a child and my parents making special stops to pick up their ice cream. I only have a vague recollection of it, but I'm pretty sure we actually went to their factory in Vermont and took a tour one time... I wish I had a better memory of that. Anyhow, they've grown from some of their more simple flavors to making a ton of great new exotic varities, and recently introduced 4 flavors of Greek style FroYo.

My tastes lean a bit more traditional, maybe a Mudpie, Chocolate Fudge Brownie, or some Half Baked. Whats your favorite flavor? Let me know in the comments.

While I've got you here, if you've got Netflix streaming you should definitely go on and check out A&E Biography series episode on Ben & Jerry's. It's a really fascinating look at the history of the company, the men, and especially their push for ecology, green living, and peace. I'm really amazed at all the great work Ben & Jerry's does. While the ending, including their recent history and the companies sale to Unilever, is a bit... disappointing, I still have faith that at least as long as Ben Cohen and Jerry Greenfield are alive and fighting the company will stay on track. There's a profound and really beautiful message in the Ben & Jerry's story not just about corporate responsibility, but about the difference a few dreamers can make. Its an easy 45 minute watch and I highly recommend it.

For more info on Ben & Jerry's check their website or wiki. And for more on Free Cone Day, and where a scoop shop is located in relation to you, click here. Now go enjoy some free ice cream!
Posted by Geoff at 6:00 AM