Along with being a fan of all things candy and chocolate, I am also a fan of advertizing. If you've watched the reviews here you know I like packaging, and appreciate good graphics, so I suppose it makes sense that advertizing has always been of interest. So for the next few weeks we're going to be looking at some fun old candy advertizing in a series of posts.

I've always been a fan of comic books, grew up reading mostly Marvel stuff, stopped in the 90s then started again in the 00s when the Ultimate line came out. Now I buy and read trade paperbacks (collected editions of story arcs), for both Marvel and DC stuff, and I really enjoy it. One of the things I miss about buying single issues though, especially back when I was a kid in the 80s was the advertizing. Seriously, even back then I loved comic book ads, there was so much life to them, so much fun. There were celebrity endorsements from people like OJ Simpson, and sometimes even the comic book characters themselves got into it. Moving into the late 80s and 90s the advertizing seems to turn almost exclusively to video games, but if you go back especially into the 60s and 70s you'll see lots of advertizing for candy and snacks. For this first series of looks into old ads we'll be checking out a few comic book ads that I found while looking in my collection. Unfortunately I've sold off a lot of my single issues in favor of trades and most of the stuff I've got is from the 80s so there isn't as much true "Silver Age" advertizing, but what I found is a lot of fun.

Today I've got two ads to kick this series off the first is for Reese's Pieces. 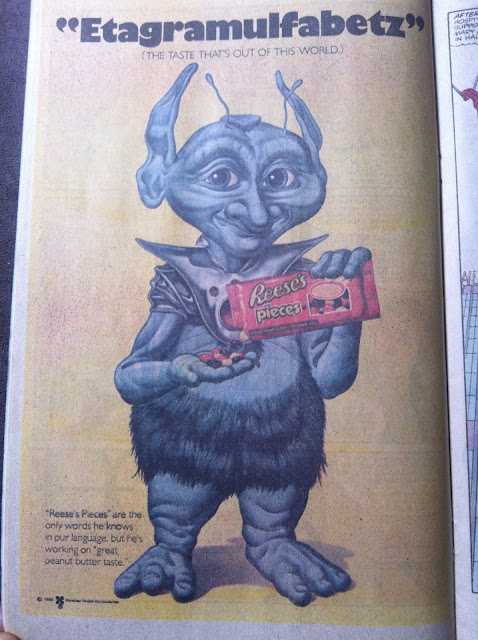 Oh the 80s... seriously this ad just makes me smile. I pulled it from the Web of Spider-Man #2, which came out in October of '85. The ad is obviously still riding the wave of love from the 1982 film E.T. with a questionably cute alien who loves chocolate and peanut butter. He's got the wrinkly old man thing mixed with Disney eyes, and the odd mix of technology in his chestplate-collar thing and savagery in his utter lack of other clothing and furry mid-section. Why people find this endearing is a mystery to me, but that was the norm for family friendly aliens in the 80s. I love the ad, but I have to question why they couldn't just get E.T. for the image? I mean I understand that it's a licensing issue, but E.T. famously ate Reese's Pieces in the movie... that's what helped make the candy so popular in the first place. Couldn't The Hershey Company afford the license fee? Or did they feel like they just didn't need the famous Extra Terrestrial... We'll probably never know. Great ad though.

One more today, and this one's quick, check out this ad for Lifesavers! 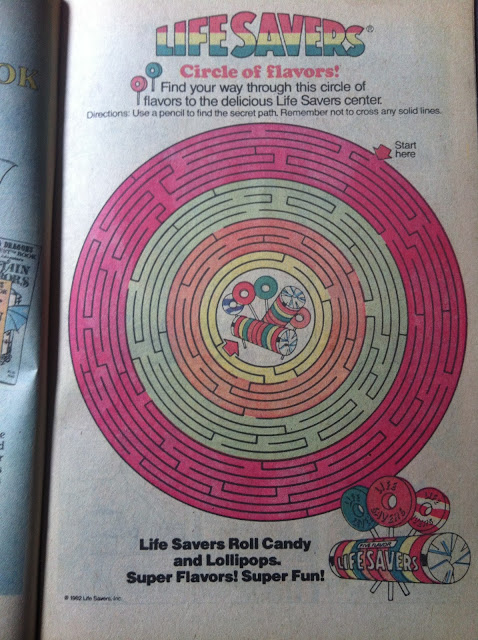 An advertizement and a maze in one??? I'm in! Mazes are awesome! And Lifesavers... oh remember Lifesavers everyone? I pulled this ad from a 1982 issue of What If...?, #37. I know the candy is probably still around somewhere, but Lifesavers we're huge in the 80s. At least they were huge with me. This is the original 5 flavors Lifesavers as well, before the market got over-saturated with Jolly Ranchers, and 101 different mints. These, probably along with Tic Tacs were the highpoint of 80s impulse purchases while you were waiting in line at the grocery store. I was a big fan as a kid and this ad makes me nostalgic. The ad itself has a nice circular theme here with the candy and the maze, although "finding your way to the delicious lifesavers center" is a bit odd since Lifesavers have no center... That line may have been more appropriate for a Tootsie Pop maze. Regardless, I still really like it. And its promoting both Lifesavers roll candy as well as Lifesavers lollipops. Honestly I don't know that I've ever had a Lifesavers Lollipop. Sounds like a good idea, but it never crossed my path... and whats the striped flavor? maybe candy cane peppermint? Those are the colors for it at least. hmm. If anyone out there remembers these lollipops let me know what they were like in the comments.

Definitely some fun advertisements here. Next time, we'll take a look at some bubble gum ads. I'm looking forward to it!
Posted by Geoff at 12:59 PM