Remains of the Day

It's always a sad sight the day after a holiday... Barren, or decimated candy aisles. Not a shred of their former glory. 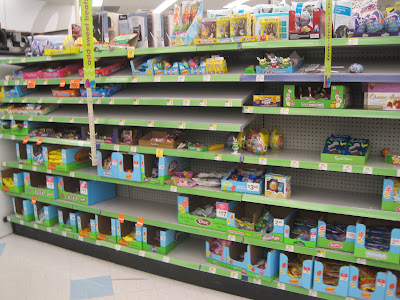 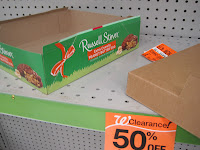 There's a lot of things going on The Day After. At chain retail stores like my Walgreens prices are automatically dropped. Then come the Vultures. One time my wife and I went to Target right when it opened on the morning after Halloween, and I'll tell you honestly it was one of the scariest experiences you could imagine in a Target. The vultures were waiting of course and as soon as the doors opened they literally rushed the store. Grabbing candy and chocolate by the fistful. It was utter madness. We ended up braving the fray but I felt a distinctly sour taste in my mouth afterwards. I just don't want to be one of those people... And there are better ways to get candy on the cheap. 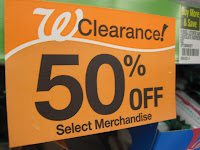 After the vultures have picked the best stuff away at the initial discount, at about the 2 - 3 day mark, that's when you want to really hit it. That's when the sweet spot comes around. 50% off signs change to 75% off, and all the leftovers are so cheap you can't help but pick them up.

Sure you're not getting the premium candy. All the really good stuff is gone at the 40-50% off stage, but what you get at the 75% off stage is the bulk stuff. If you time your visits to the candy aisle just right and manage to get there the day they change over to that Stage 2 clearance you're in luck because all of the Peeps, Russell Stover cream eggs, and a few other items that are distributed en-mass will be on great discount. Don't leave it too long though, or you'll end up rifling through a hundred dark chocolate and coconut eggs, just to find a single last caramel. And at that point (say a week and a half after the holiday) it just starts to feel dirty. 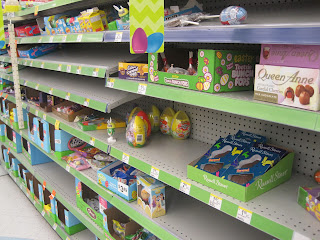 The guys at Walgreens told me they were making room for a Mother's Day section. Remember back in the day when there wasn't one candy holiday after another? I'm interested to really have a close look at what they post for mothers day. Will it just be nice boxes of chocolates? or something else?

We'll have to wait and see on that one. As for the remainder candy... well here's my haul so far. I'll keep you updated on what becomes of the remainders as the days move on. Until then I've got some good treats to keep me occupied. 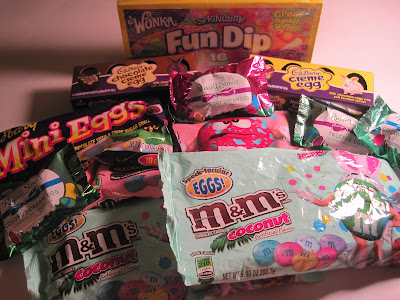