Welcome to another look at some fun old advertisements for candy that I came across while browsing my comic collection. Today I'm going a bit off track of tradition here on Walking the Candy Aisle, as we look at a few snacks. While technically these probably aren't in the candy aisle in every store. You'll certainly find all of these treats nearby the candy aisle, and their advertisements are great.

First up today is Hostess with a double ad for Cupcakes and Twinkies! 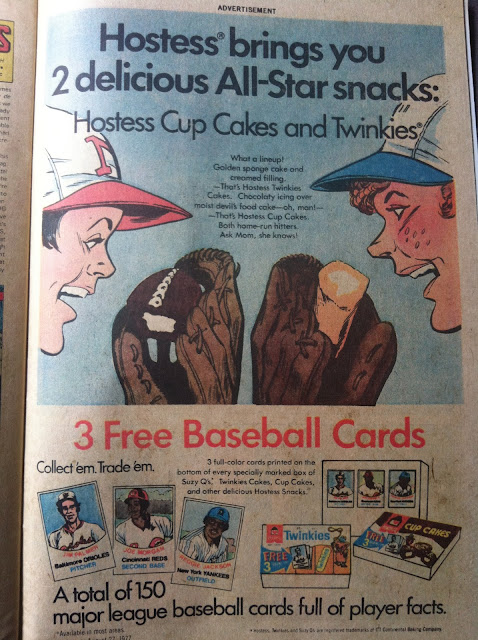 Hostess snacks are great. Too bad I was never ever allowed to eat them when I was a kid. After deliciously describing these treats the ad asks us to "Ask mom... she knows!" Well my mom certainly didn't. Not to pout, but really that kind of stinks. Did you guys get Twinkies growing up???

Anyhow, apparently these cakes are SO good that it even brings rival baseball teams together over their awesomeness, although why they both have their gloves on is beyond me. Which team is at bat if they're both in the field? Any why the heck don't they take the gloves off to eat the Hostess cakes?! did they just catch them in a popfly? If that's the case I can understand their looks of wonder and amazement. Either that, or they're wondering who took that bite out of their delicious treats...

As for the baseball cards, well that's pretty cool. Apparently Hostess produced a couple of these sets of baseball cards over the years. With 150 cards, that's (do the obvious math now) 50 boxes of twinkies to buy... seems like an awful lot, but complete sets of this run are going on ebay for between $200 and $300 dollars, so I guess it was worth it to whatever obsessive kids could manage it. Even if I had been allowed Twinkies I don't think I would've been able to get all those cards though...

Onto an ad for Cracker Jack. 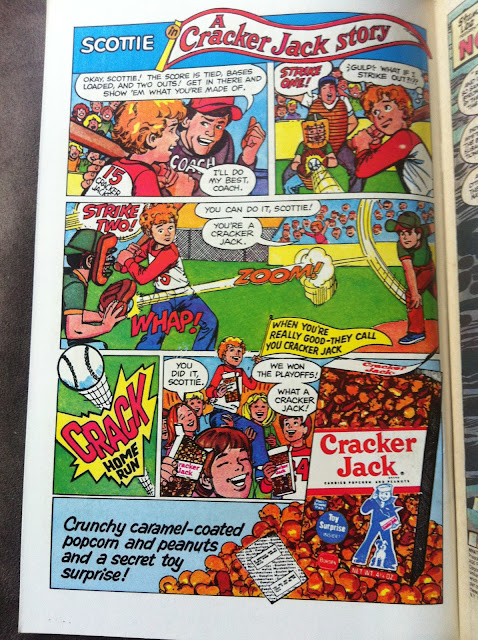 Well this just proves it, people love baseball. Even I could tell that despite growing up in Canada even with the hockey fanatics.  This is definitely a fun little story about Scottie the Cracker Jack winning the big game. I'm glad the coach believes in him, even if he has his doubts. Thank goodness Scottie didn't strike out, that would really make for a depressing advertisement... It'd probably be pretty funny though. I guess this is little league or something but I have to point out the lack of helmets. It was a different time then. As for the Cracker Jacks themselves, well I've always been a fan. These days given the choice I'd probably go for Poppycock instead but Cracker jack was always fun as a kid, and the prizes we're pretty fun. I mean not like Kinder egg fun, or like they used to be back in the 50s and 60s fun, but the prizes we're at least something. Now I think when you get a Cracker Jack box you're lucky if you get anything more entertaining than a Bozooka Joe comic. 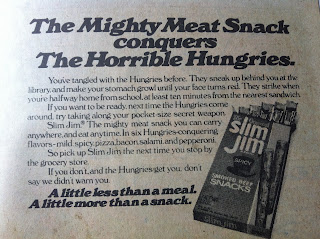 This next ad for Slim Jims is just for quick fun. I always loved Slim Jim, but didn't remember any advertising for it before Macho Man came on board. It's nice to see they had an actual campaign with a through line fighting the Horrible Hungries before Randy Savage joined up. I also had no idea they came in 6 different flavors (mild, spicy, pizza, bacon, salami, and peperoni). And finally I have to agree with the tag here: "A little less than a meal, a little more than a snack." Nice.


Finally  I;ve got a couple of cookie ads. The first is another game ad, this time from Oreo. 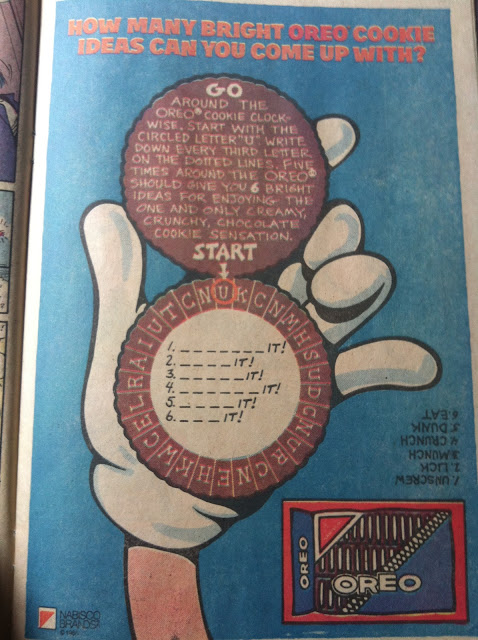 As you know I love advertising that gives me a game as well. This time its an Oreo decoder puzzle.... Wait a sec. around the cookie 5 times?! That's too much. What do I look like I've got all day here? Ok, ok... I know as a kid I would've been all over wasting my time doing this. But with an answer key right there I just can't bring myself to actually put in all that work. Yes I love Oreo, but that dedication only goes so far.

Back in the day it seemed like Oreo and Chips Ahoy! we're the only game in town when it came to store bought cookies. At least they were the only ones marketed to kids. I remember how excited I got when double stuff Oreos we're announced. Even though we didn't usually have Oreos around the house you can't be a child of the 80s and not remember the advertising. It was as heartwarming as Coca cola, with the fun of Reese's Peanut Butter Cups.

My only question about the ad, who's glove is that???

The final ad for you today is another 'cookie-like' product, its Fig Netwon. 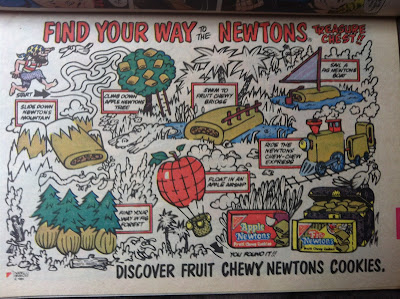 As you may have expected I am a fan of Fig Newton, I'm also a fan of treasure maps. It seemed like a staple of cereal commercials that at some point Lucky, or Trix, or Toucan Sam would have to navigate their way through a treasure map to the goal of delicious cereal and I'm glad to see it carried over to Fig Newton. Question for those playing along at home... is a Fig Newton a cookie? I never thought so myself but I've heard others call it one. I see on the ad itself they call it a cookie, but its certainly non-traditional if it is one. Whats your take on it?

As for the ad I really enjoy it. There's is so much fun imagery here, I like the idea of a world with fig forests, and newton mountains. Probably not somewhere I'd like to live permanently. but it'd be a pretty fun place to visit. It does seem a bit odd that a pirate is hiding Fig Newton treasure in a land literally made of Fig Newtons.... couldn't he just get more wherever he went? Ah well... It doesn't really matter, the ad is still brilliant.